Your contribution will help sustain our efforts in providing subsidised legal assistance and initiating and participating in advocacy efforts to realise the imagination of a society based on the tenets of the Constitution.

In compliance with tax regulations, donations from Indian nationals are required to be collected separately.

If you are an Indian citizen and/or have an Indian passport, please click the following button to securely donate to ALF.

If you are not an Indian national and are interested to donate to ALF, please write to communications (at) altlawforum.org. 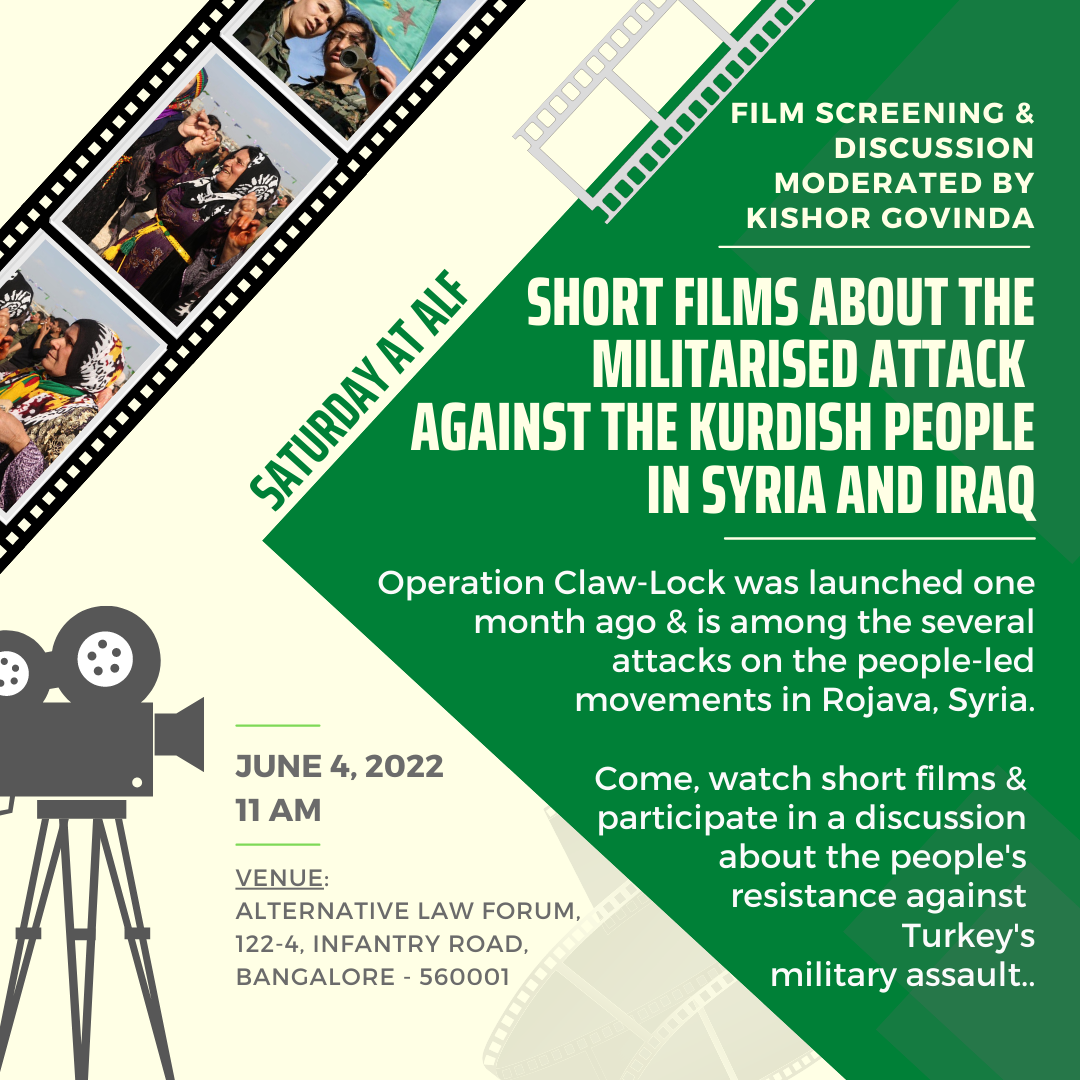 It has been one month since the state of Turkey launched the massive military Operation Claw-Lock, against the Kurdish people in Syria and Iraq. Special forces have gone to the mountains of Kurdistan, and bombing has continued day and night with the might of NATO behind it.

Operation Claw Lock is the latest in a series of manoeuvres by Turkey that began in 2019, which have led to hundreds of deaths. These manoeuvres violate the sovereignty of Iraq and Syria. They are an attack on the emergent political formations of the people in Rojava, Syria.

Rojava has gained international recognition for its unique and inspirational forms of grassroots democracy and its effective resistance to authoritarian, patriarchal and fundamentalist forces within Syria. Turkey has been using the cover of the Russian- Ukraine war to escalate its attacks on the Kurdish people.

Come join us on Saturday at 11 AM, for a film screening and discussion moderated by Kishor Govinda. Here are the films we will watch together:

1. Rojava: A democratic system in progress (17 minutes) – Interviews with people who have worked with the struggle. It gives an introduction to the unique system of politics in Rojava

2. Jinwar – Free Women’s Village Rojava (6 minutes) – This video is about Jinwar, a woman’s village where only women and children reside. The goal of the village was to create a space where women are autonomous. This will introduce the brands of ecology and feminism practices in the area.

3. Why did Turkey send troops to attack Iraqi territory? (9 min) – This is not a documentary but an animated video that gives a historical overview of Operation Claw Lock and the Kurdish movement.

Previous Online Release of Report: Participation in Play Demonstrating a Practicable Approach to People’s Participation in the Context of Policy Making during Covid 19
Next Ye Lo Bayan Humare – Film Screening and Discussion with Uma Chakravarti

Unless explicitly stated, all the material on this website can be used under a Creative Commons Attribution-Non-Commercial India 2.5 license.